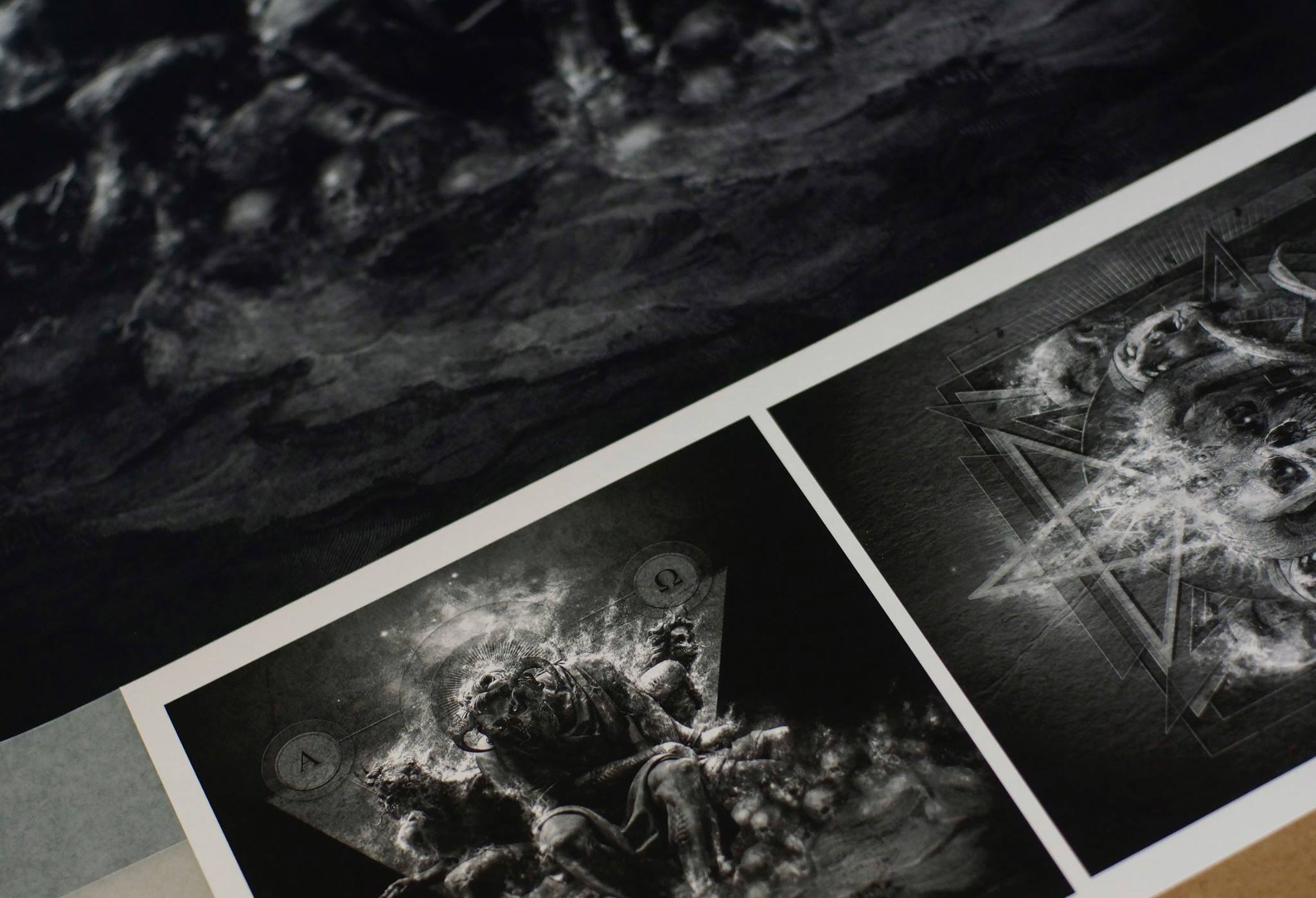 Diabolic Gnosticism: Mythos and Philosophy is a truly evocative work, charged with symbolism and hidden meaning. To ease the reader into his descent towards the cosmology of this volume, artist Néstor Ávalos has created several illustrations that capture that symbolism and re-shaped it in his shocking visual style. Known for having worked with many known bands such as Bloodbath, or respected authors such as Michael W. Ford, Néstor Ávalos is a designer and illustrator that delves tirelessly into the forbidden knowledge brought to him by his visions of the Other Side.

Diabolic Gnosticism: Mythos and Philosophy contains eight full-page illustrations, each one ritually finished with ox blood and created for the glory of the Devil

What follows is a short interview with artist Néstor Ávalos about his work on Diabolic Gnosticism and his personal experiences with art and the occult.

Greetings Néstor. Could you please introduce yourself and your work, for those who do not know about your art? What pushed you to create art with a focus on the occult?

Hello, first I would like to say thank you for this interview and for letting me be part of this amazing work dedicated to and by Him. The way I could define my work is “a Gate to our spiritual chaos”, an inner warfare against all the religious dogmatic concepts and the social standard rules inflicted upon us; turning the holy to the unholy, the black and white as opposite forces in sparks from a primal creation.

What pushed me to incorporate the occult in my art was the contact, study and development of myself into this forbidden wisdom, properly around seven years ago.

Do you have any formal education, or are you self-taught? Who and what are your main influences and inspirations? It is easy to see a lot of influence from religious art in your work, but is there any specific artist that marked you?

I am completely self-taught, but I’m looking to learn from some Illustration courses and listen to another artist’s advices.

The religious topic has been present all my life; I had a Catholic upbringing, since everybody knows that Mexico is strongly a Catholic country and the contact with religious imagery, costumes, venerations, etc. is completely inevitable. You can also find lots of the non-official spiritual syncretism between magical traditions. In this double moral game, a great part of the population believes and uses this magical “systems” not recognized and rejected by the official established religion; the shameful part is that they use it not as a way to learn, to create a communion and develop of their spiritual self, for them it’s just an easy way to resolve pretty mundane situations…

You have done works for bands, publishers, authors and anything in between, and of course, for your own artistic expression. Is it difficult to go from drawing for yourself, something inspired by your own vision, to a piece of comissioned work?

Hehe yes, it really depends on which people you’re working for. Some of them have an extremely precise idea about what they’re looking for and it is then when you have some obstacles in your work as an artist, because you have to translate an idea, a concept into a material interpretation of someone else’s thought; this could be a little bit frustrating, but at the same time it’s a challenge that you could use to increase your level of self-demandingness. But there are also more creatively-free projects, specifically working with publishers, where you have more freedom in your creativity.

Freedom is primordial, it creates a direct link between you and the forces that you’re managing. “Magick is wisdom, the devil is freedom, chaos becomes liberation.”

A finished piece at Néstor’s studio

When it’s about a creation with a specific topic I prefer to ask for the material that involves the theme that we are going to manage. People that contact me, it’s because they have a previous idea about what they are looking for and the direction of this project – “a materialization of the fire from the other side”.

Personally, I like to have more freedom in what I’m working and what we´re looking for, but I’m not closed to any advice or observation in the creative process, it’s a part of being hired.

Let us talk about your occult background; are you a practitioner? You are obviously part of the occult scene and a connoisseur of the Occult Arts, but does it go beyond simply being an interest?

Practitioner – It took a long time of study, sacrifice, liberation and condemnation to gain this “title”.

How was the process of working with the illustrations for Diabolic Gnosticism? Are you satisfied with the result? Do you enjoy working with writers and publishers?

A marvelous experience! I got engaged since I knew the topic of the book; I have a deep connection with the mystic figures, bringers of the forbidden wisdom through the universe revealed by the Left Hand Path arts.

The process was extremely fluid, magical and natural. Starting from the received scripts, I begun the creative procedure; these pieces are a next-step in the creative fields of the project – “a communion between the sub-consciousness and the spheres of the dead tree”.

A work in progress

You have recently had an exhibition for your work at Mexico. How was the experience? Was this your first time exhibiting?

It was pretty cool! and yes it was my first public exhibition. It’s interesting to see a “controversial” theme openly exposed to the society and how people react when they are confronted by this work, something that defies openly their believes and clashes face to face with their faith, their fears, their most secret doubts, like salt in a wound. But it could also be a doorway towards liberation for a few, who needed being pushed into the depths of the savage fire.

Do you create your art only through paint, or have you tried scuplture or photography as well? What materials do you usually utilize?

Right now I’m using paint, pencils, pen, tints, digital media and for this project I incorporate the use of blood as a symbolism, like a blood offering, but I’m considering exploring other facets of course. But I need first to increase the level of my skills in this area.

Thank you for your time.

It was a pleasure, and I would like to thank to all the souls that support and give me the confidence to keep going in to this mysterious path that I decided to walk.