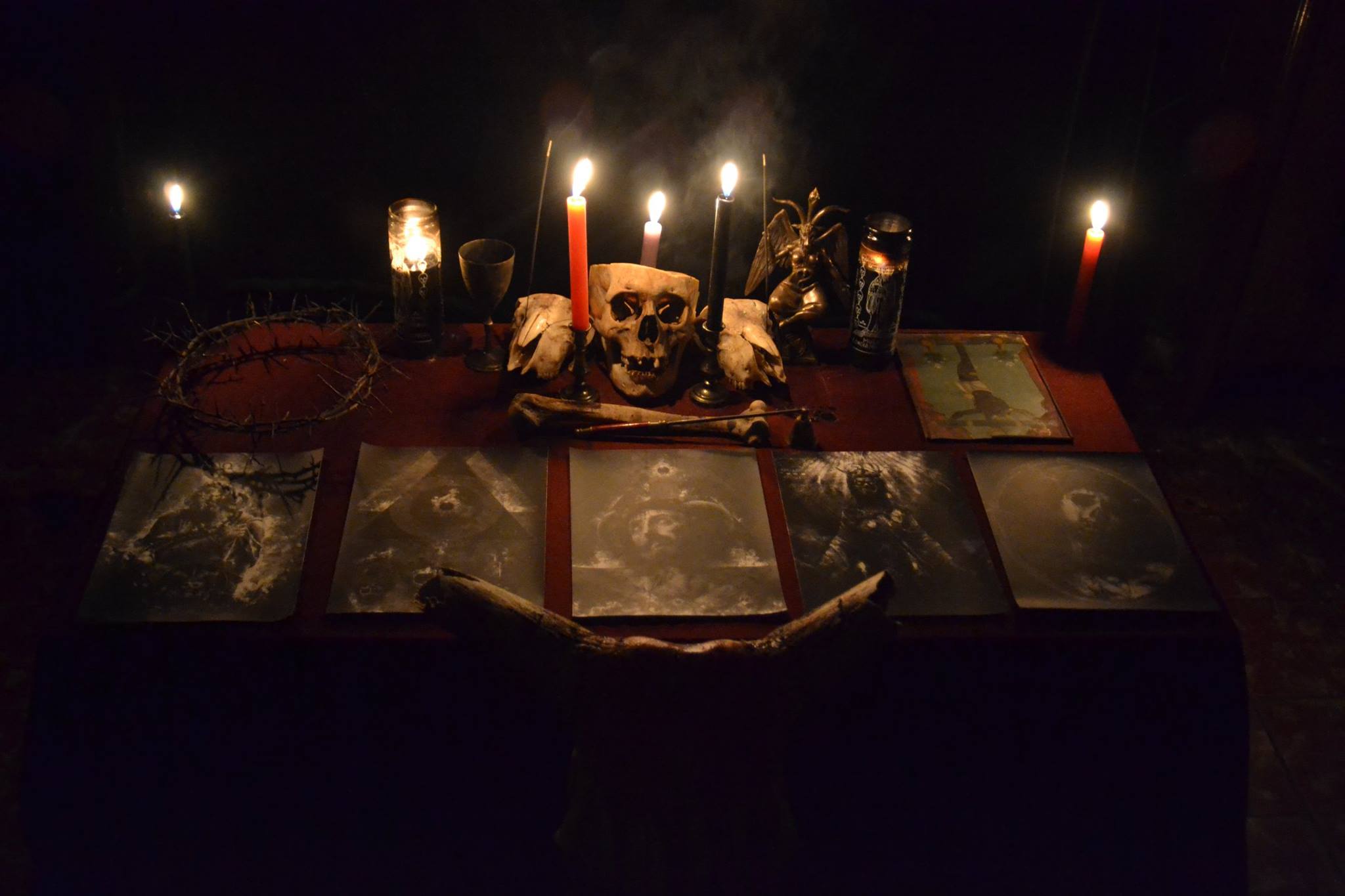 Nestor Avalos is a Mexican born from  graphic artist whose main focus is a wide rage of occult art. Though his art mainly represents various concepts of satanism, he also his draws inspiration from many cultures and represents the most feared aspects of the left hand path. Not only has he received worldwide claim but his work has been used in books and as album cover art.

K.C. – Hi Nestor! Happy to finally be able to conduct this interview, how are you?

Nestor – Fine, thank you also I would like to say thank you to dedicate this space to my work and all the people behind this magazine.

Right now I’m pretty busy with a couple of projects in process, art for books, artwork for some bands and personal manifestations in mind.

K.C. –You have an upcoming gallery display in the CampoSanto Art Gallery in Guanajuto, Mexico. Would you like to tell us about it,how long will it last  and which of your works visitors might encounter at the events?

Nestor – Yes, this display it’s a big achievement for the project a heavy stone, a statement of power. It’ll bring a higher exposition to the work, not just for the ones related in this occult dark themes but also now it’s open to everybody, to the “external world”, looking to touch the soul of the spectators.

The demonstration will be displayed from March 25th to April 25th – in Guanajuato Capital City – I want to emphasize that Guanajuato City it’s one of the most important cultural cities of the country, it’s the house of different worldwide cultural festivals displaced in México also count with a big number of galleries and museums. For this reason it’s a pretty good platform to start.

Nestor – Well my first contact with art was with sacred art – I was born and got raised in a Catholic country int his majority, for this particular reason it’s part of my personal background, turning into one of the most important characteristics of my work; I take the religious and sacred aspects and give them the interpretation about what it’s religious and sacred for me, based in my personal experiences and beliefs.

Personally, these characteristics appeared since I started to draw, I guess. Started in a very primitive point of view about how, and what does “darkness” means. I could say that the application of these magical and religious topics appeared consciously, from a personal process of rapture; I got broke in a period of time in whole aspects, for the world it looked that I had it all, but had nothing – I had lost the most important thing, myself.

I was nothing and nobody at the same time in my own existence; it was a precious but decadent time in which I question myself in all possible facets. I had to destruct the I to rediscover the self, he was hidden through the dirt and human waste where I built that unrecognizable idol in what I had converted. Then I started to dig in a determinate and mindful way into the occult, starting my journey to the fall and burn in my own liberty, deciphering what does freedom really means. The fall started 7 years ago.

K.C. – Do you often find that people can relate to your work? Or does it appeal to a certain type of crowd?

Nestor – Well, it’s a pretty specific sector that gets really interested in it and gets smaller talking about the ones who decide to purchase or commission a piece of art, but I can’t reduce the scope of this work, it’s like to try to confine a hurricane inside of a small box; the essence of the work cannot be explained in base of the precarious human stereotypes.

Art in every kind of expression has to create an energetic channel between the creation and the spectator, generating a link of emotions between them, a constant flow of energy, charged with emotions, feelings and sensations.

K.C. – Your work has been featured in many occult books and magazines, as well as album artwork for many metal bands, can you tell us some of these? and which ones are you most proud of?

Nestor – When I was a teenager , I dreamed to create art for some metal musicians, I’m talking around 16 years ago! I can’t say that I just feel proud for just a few of them, personally I’m proud of all of them . I create them from the deep of my soul, trying to reflect my spirit in every creation, I know that with the time you evolve and refine your technique, it’s a natural process but every piece has their own personality and their own essence, they are a personal manifestation and catharsis from my soul, my life and every experience that drives me to that specific state and time.

I’m very pleased that the work that I’m developing has jumped from the “satanic, occult, heavy metal cliché” to the REAL left hand path, manifesting their true essence into the editorial world. Personally I think that it was a natural progression, more I fall in to the dark more the work gets impregnated by the stench of the shadows.

Personally, I’m very grateful with every one of them who decided to put their trust in my work. Thank you.

K.C. – Now to the most mundane aspects of art, what tools do you use to create your art? would you say you have a specific style?

Nestor – I could say that it’s a mixture of techniques, Digital Illustration (Photoshop), Oil, Ink, pencils, blood, paint, etc… I’m looking to learn more and new techniques to let me improve my work.

K.C. – This field of occult art is not necessarily new, yet it has seen a bloom of new artists in the last few decades , are there any particular painters or musicians in this field whom you admire or look up to?

Nestor – Well they are a lot of them, now with these good things that technology brings, it’s the easy way to find, discover and stay in contact with amazing and interesting people.

Musically – my personal taste its open to any musical genre from extreme metal to something considered commercial, but right now I’m engaged to these next bands also I think that them are accord of the interview. – The Devil’s Blood, In solitude, Urfaust, Ascension, Aosoth, Blut Aud Nord, Nightbringer, Acherontas, Schammasch, Universe 217, Heretoir, Melechesh, Deathspell Omega, Triptykon, Insanity Reigns Supreme, Secrets of the Moon, Funeral Mist, Mgla, Watain, Lustmord, Noircoeur, Phurpa, Black Sun, Emme ya, ONA chants and meditation music, Hecate Enthroned, Norot, Rotting Christ, Behemoth, Teintanblood, Bloodbath, Danzig, Dread Sovereign, The House of Capricorn, Temple of Baal, Ignis Haereticum – and so much more! The list could be extremely extensive.

K.C. – Is there anything you would like to say to anyone who might come across your art in the future, and your present supporters?

You could find my work in these different platforms –

LIVE IN CHAOS / BURN IN FREEDOM

For the Record: The Occult Art of NESTOR AVALOS    Nestor Avalos is a Mexican born from  graphic artist whose main focus is a wide rage of occult art.